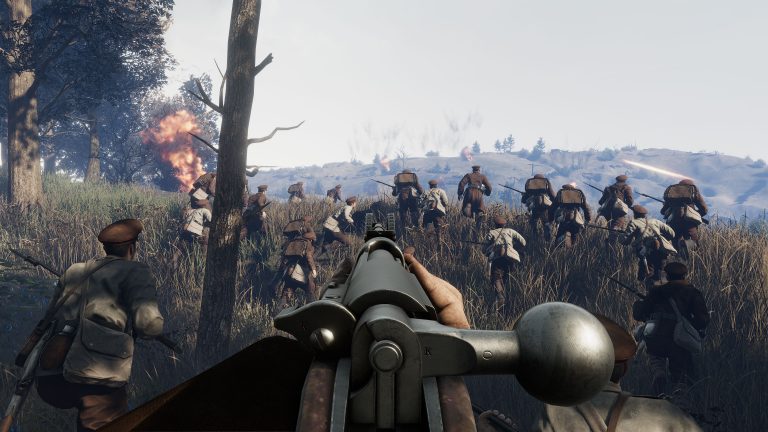 Tannenberg is now in open beta, accessible via Early Access on Steam for $17.99 with a 20% loyalty discount for Verdun players running until December 1.

There is also a Supporter Edition available for $22.99 which will include the game, a special medal, the soundtrack, Tannenberg artwork, a scoreboard star icon and bonus career points to get more variety right from the start.

Authentic Winter Offensive
Players have the chance to brave the snow as they sign up with the Russian army or their opponents in this standalone expansion to Western Front WW1 shooter Verdun, as the action moves to the less well known Eastern Front. Tannenberg features four distinctive squads including the iconic Russian Cossacks and often underrepresented Austro-Hungarian K.u.K. troops, more than 20 new weapons, and 4 sprawling maps. Fighting will ebb-and-flow according to where each team chooses to concentrate their strength. Beware of encirclement in the new Maneuver game mode!

Whether your weapon of choice is a lethal sabre, powerful machine gun or simply a good old rifle you should keep your wits about you and stick close to your squad. By playing together, players build up cooperative XP which will unlock new squad abilities as a reward for team play. The scenery of Eastern Germany and Russia ranges from wide open fields and foothills to dark forests and lakes, and snow is always a possibility. Each map comes in different versions with a range of weather conditions, so when a match is starting you can never be sure what to expect.

Developing Tannenberg
Tannenberg is the next step for the 1914-1918 WW1 Game Series, allowing players to experience fighting on the Eastern Front. This is a very different battleground to the trenches of the Western Front, and as such required some substantial changes to the gameplay.

Developer Jos Hoebe of Blackmill Games says: “Once we had decided on going to the Eastern Front with our new game, the next step was identifying the characteristic elements of the war in the east, and how that would change the gameplay compared to Verdun. For instance, the huge armies and great distances involved both called for larger, more open maps and doubling the player count to 64!”

The biggest difference is the focus on mobile and tactical aspects of the Eastern Front in contrast to the trench warfare on the Western Front. The game’s namesake battle at Tannenberg was an example of encirclement, and far from the only instance of it on the Eastern Front.

The new Maneuver game mode gives players far more freedom in their movement and rewards teams who can adapt to changes in the tactical situation, as well as offering more variation with battles thanks to a variety of different preset weather conditions and objectives. Players will be battling in teams of 32 vs 32 to control a spread of objective zones across larger and more open maps. The choice of where to attack and defend allows players to control the flow of the battle as the capture and loss of points will open up or cut off different avenues of advance. This represents the nature of fighting seen on the Eastern Front. Tannenberg also includes full AI bot support for the new game mode, to ensure an epic battle every time.

The Tannenberg open beta is close to complete, with all content present. The open beta period on Early Access will be focused on making balance, sound and performance improvements as well as implementing a new user interface to refine the game experience before the full release in Q1 2018. There will also be a system added to allow easy switching between the Western and Eastern fronts ingame. Work on Verdun will continue as well, as it will benefit from the new visual and audio improvements in Tannenberg – an update with this new content is expected to go live in Q1 2018.

Celebrations
To celebrate the release, the developers have planned a series of events to test the knowledge of Verdun and WW1 history fans, with Tannenberg keys up for grabs! Expect to be quizzed on differences between the Eastern and Western Fronts, realism in Tannenberg and Verdun, and perhaps even more challenging trivia.

1914-1918 series
Starting out on the Western Front with the release of the first authentic WW1 FPS Verdun back in April 2015, and expanding to the Eastern Front with the upcoming Tannenberg, the 1914-1918 series throws players into intense warfare inspired by the chaos and fury of iconic battles from the First World War. With over a million copies of Verdun sold, this novel and underserved setting has proven popular with the gaming community!

Every game is built on a base of thorough research and receives extensive post-release support bringing new content and challenges for our players. The games in the series are linked, but each one is standalone and provides a different experience, reflecting the nature of the fighting in the many-sided theaters of the war. ###